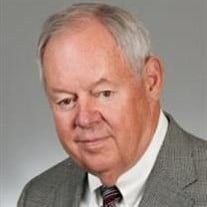 Reverend Jonathan P. Stein was called home to be with the Lord on December 21, 2016 at the age of 81 years, 7 months. Pastor Stein served his Savior for 56 years as an ordained Lutheran Church Missouri Synod (LCMS) pastor shepherding congregations in Michigan, Nebraska and Missouri. He then accepted the position as the first ever campus Chaplain in the 167-year history of Concordia Seminary in St. Louis, MO. He also served on countless boards and committees leading and encouraging congregations and communities to serve those in need. He officially retired in May of this year from Concordia Seminary. Pastor Stein was a lifelong, avid St. Louis Cardinals baseball fan and had a similar passion for the games of golf and bridge. Jon is survived by Sandra, his wife of 57 years, his 4 children Susan Dietze (Steven) of Olathe, KS, Sharon Bishop (Mark) of Cary, NC, Jeffery Stein (Judy) of Placerville, CA and Mark Stein (Casey) of O'Fallon, MO. Eleven grandchildren and two great grandchildren. Three brothers David Stein (Judi) of Leander, TX, Stephen Stein (Devonia) of Bloomington, IN and Matthew Stein (Mary) of Lawrence, KS. Jon was born on April 25, 1935 in Chillicothe, MO to Fred and Irene Stein. He received a master of divinity degree from Concordia Seminary in St. Louis in 1960 and was ordained as a pastor serving his first church in Howard City, MI. He earned a master's degree in counseling from Michigan State University in 1967 and served as the senior pastor for five churches from 1960 to 2004 when he retired. He served as the campus Chaplin of Concordia Seminary from 2006-2016. Services will be held Wednesday, December 28th at Resurrection Lutheran Church in Cary, NC. Visitation at 9:00 am followed by worship service and interment beginning at 10:00 am. In lieu of flowers Memorial contributions may be made to Concordia Seminary, 801 Seminary Place, St. Louis, Mo. 63105. Gifts may be made online at www.csl.edu/give

Reverend Jonathan P. Stein was called home to be with the Lord on December 21, 2016 at the age of 81 years, 7 months. Pastor Stein served his Savior for 56 years as an ordained Lutheran Church Missouri Synod (LCMS) pastor shepherding congregations... View Obituary & Service Information

The family of Jonathan Stein created this Life Tributes page to make it easy to share your memories.

Reverend Jonathan P. Stein was called home to be with the Lord...

Send flowers to the Stein family.