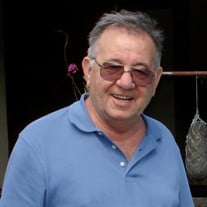 John Dancovich, age 82, of Cary, North Carolina, passed away on Sunday, March 31, 2019. John was born in Ploiesti, Romania on March 8, 1937 to Vasile Dancovici and Maria Ionescu. As a child, he watched the Allied planes fly over Ploiesti during WWII. John graduated high school in Ploiesti and completed the compulsory military training. He loved motorcycles and playing cards with his friends. John met his wife, Magda, while enrolled at the University. They were married for 57 years. John and Magda moved to Bucharest where John earned his Masters Degree in Electrical Engineering. Their daughter was born in 1969 and the following day, John shook hands with President Nixon, the first American President to visit Communist Romania. It is not clear which event was more exciting for John! In the 1970's, John worked for the Romanian Naval Authority and was sent to Gdansk, Poland and Stralsund, Germany to inspect ships. John’s wife and daughter joined him there for a few months each time. The Dancoviches loved to travel but were limited to Communist countries. In 1980, they went on a road trip to Poland and tried unsuccessfully to extend their trip into Sweden and Austria. Upon their return to Romania, they began the long process to emigrate to the United States. John and his family finally made it to the US in 1982 and settled in California. He discovered Hawaii and loved vacationing in Lahaina and Ka’anapali every time they went to Maui. John got involved in the semiconductor industry and in 1997, John and Magda started Ultrasil Corporation, a wafer manufacturing company. Ultrasil was a great source of pride and joy for John and he thought of all employees as family. John continued working until John and Magda moved to Cary, North Carolina at the beginning of 2019. Unfortunately, John only had a short time to enjoy North Carolina before passing away from diabetes complications. John is survived by his wife Magda, their daughter Ileana (Tim), and his nephew Andy Mihai. John was preceded in death by his father Vasile, his mother Maria, and his sister Nina Mihai. A funeral service was held on Thursday, April 4, 2019.

John Dancovich, age 82, of Cary, North Carolina, passed away on Sunday, March 31, 2019. John was born in Ploiesti, Romania on March 8, 1937 to Vasile Dancovici and Maria Ionescu. As a child, he watched the Allied planes fly over Ploiesti during... View Obituary & Service Information

The family of John Dancovich created this Life Tributes page to make it easy to share your memories.

Send flowers to the Dancovich family.