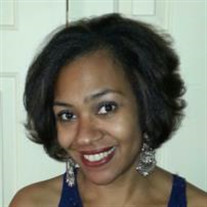 God in his infinite wisdom has called from our midst, our loved one, Courtney Ruth Hodge. We, the family, bow in humble submission to His will. Courtney was born in Detroit, MI on November 25, 1975, the daughter of James Bernstein Mosby (deceased) and Geretha Mosby. She accepted Christ at an early age and was active in the Youth Usher Board and the Young People’s Choir at Hartford Memorial Baptist, in Detroit, MI. Courtney was educated in Detroit at Gesu Catholic School and Cass Technical High School. After graduating from Cass, Courtney began her collegiate studies at Hampton University in Hampton, VA where she majored in accounting. Working for a few years in the business/financial industry, Courtney decided to move back to Detroit to complete a Masters of Business Administration at the University of Detroit-Mercy. It was during this time that Courtney met and fell in love with Gerald Randolph Hodge. After their marriage, Courtney and Gerald returned to Apex, NC to raise their family. Shortly after returning to North Carolina, Courtney started her own business, Weddings and Events by Courtney. She planned and directed many weddings and other joyous events. Courtney soon became a “dance and karate mom.” Throughout the week you could find Courtney taking Bridget, her daughter, to dance classes and her son, Gerald II to Taekwondo classes. She was very involved in her children’s lives. The entire family enjoyed attending services at Hope Community Church in Raleigh, NC. Not only was Courtney a dedicated mother and wife, she maintained life- long friendships with many, including classmates from primary, secondary, and post-secondary schools, neighbors, and other members of the community to name only a few. Courtney was a modern-day princess. She was elegant, gracious, and kind. Her spirit filled the room, and everyone knew she was present. Her smile was a Ray of sunshine and her laughter warmed your heart. Courtney Loved and was loved by many. Courtney Ruth Hodge leaves to cherish her memory, her devoted husband (Gerald Randolph Hodge), daughter (Bridget Ruth Hodge), son (Gerald Randolph Hodge II). She also leaves her mother (Geretha Mosby), sister (Tracy Ann Threat (Carl)), brother (Gregory Kenneth Mosby), father-in-law (Randolph Adolphus Hodge (Jean)), mother-in-law (Gloria Pinckney), brother-in-law (John Andre Pinckney (Sandra)), sisters-in-law (Gail Harris-Litkett (Louis)) and Robin Jenneane Ladson (Alan)), and a host of nieces, nephews, cousins, and other family members and devoted friends.

God in his infinite wisdom has called from our midst, our loved one, Courtney Ruth Hodge. We, the family, bow in humble submission to His will. Courtney was born in Detroit, MI on November 25, 1975, the daughter of James Bernstein Mosby (deceased)... View Obituary & Service Information

The family of Courtney Ruth Hodge created this Life Tributes page to make it easy to share your memories.

God in his infinite wisdom has called from our midst, our loved...

Send flowers to the Hodge family.